Despite their incredible energy savings, there is still concern over the mercury content of CFLs. Mercury is a necessary ingredient in the CFL because it is a main component in the process that creates visible light inside the fluorescent tube. Without the mercury, there would be no visible light shining from the light bulb. The mercury content inside the CFL, however, is not the only factor that should be considered when analyzing the environmental impact of a light bulb.

Are CFLs bad for the environment?

More than half of the electricity generated in the United States is made by burning coal, which contains mercury. As the coal is burned, the mercury is vaporized and sent up the smoke stack. Mercury in vapor form is much more dangerous than in the solid state form used in the manufacturing of CFLs. Furthermore, coal power plants are the single largest source of mercury emissions into the environment. According to the Environmental Protection Agency, the mercury released from powering an incandescent bulb over five years is 10 milligrams; however, only 2.4 milligrams of mercury is released over the same period of time to power a comparably luminous CFL. Thus, by using up to 75% less energy than incandescent lamps, CFLs decrease the amount of greenhouse gas emissions in our atmosphere and help off-set global warming. 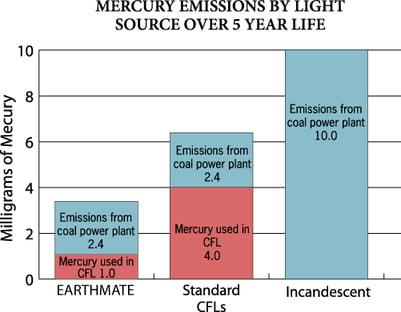 For example, Neolite CFLs only contain 1 milligram of mercury inside the tube. That’s 75% less mercury than the industry standard! With only 3.4 milligrams of mercury used over the course of its life, Neolite yields the greatest reduction of mercury emissions, making it a much safer lamp for the environment.