"Last one out of the room, turn the lights off!"

If you had energy-conscious (or budget-conscious) parents, you may have heard this refrain throughout your childhood. You may even say it yourself. After all, having the lights on in an unoccupied area is undeniably wasteful.

Simple reminders like this might work in the home. But what about in industrial or commercial spaces? That’s where occupancy sensors and vacancy sensors shine.

In this article we’ll talk about what these sensors do and the spaces where they can be the most effective. We’ll also talk about the benefits – in addition to saving energy – that you’ll want customers to know about.

How Do Occupancy Sensors Work?

On the spectrum of smart technology, motion sensors tend to fall at the more uncomplicated end of things. They detect motion in the immediate area of the sensor, working off ultrasonic sound waves that bounce off a moving object. The most common use of motion sensors? Security systems and safety lights.

While less frequently used, microwave occupancy sensors combine the capabilities of both. Using electromagnetic waves, they can distinguish between repetitive motion from a heat source like hot machinery, and the less predictable motion and body heat from a person. (And they use low levels of non-ionizing radiation, so they’re perfectly safe.)

The Benefits of Occupancy Sensors

The distinction between motion and occupancy is important when we think of the benefits of occupancy sensors.

In many facilities, there may be plenty of things moving around in rooms where nobody is present. A printing press may be finishing a run. An automated hospital logistics system might be transporting used bed linens to the laundry. A floor-cleaning machine might be polishing the supermarket aisles after hours.

Or, a fan might be oscillating in an office, making a curtain flutter.

With ultrasound-based motion sensors, the lights would be blazing for as long as these objects are moving. With a PIR-based or microwave-based occupancy sensor, none of those machines would trigger the sensor, saving the customer money and light life. (More on light lifetime later!)

Occupancy sensors can be paired with other lighting controls for maximum energy savings:

There are other benefits besides energy savings, however.

Another way occupancy sensors can save customers money is with light lifetime. Litetronics already offers long fixture life with our 10-year/100,000 hour warranty on LED lights. If the customer is running a light for eight hours a day instead of 24, it will take them much longer to get to 100,000 hours of use. They’ll save energy and need to replace fixtures less frequently.

Finally, light use also goes hand-in-hand with HVAC system use. When occupancy sensing verifies an area is in use, the signal can be shared with an HVAC system. Smart technology can use this signal to cool or heat areas of a building from a more energy-efficient temperature to one that is comfortable for people.

In more sophisticated IoT environments, occupancy sensors can even provide occupancy data, helping facility owners uncover occupancy patterns and volume, which can be key when planning things like cleaning schedules or supply replenishment.

Whether it is an office worker entering an unlit stairwell or a security guard making the rounds at night, light is key to occupational health and safety.

However, light switches aren’t always in the most convenient places, especially in older buildings. If an employee needs to fumble around in the dark for a switch, they’re in danger. Occupancy sensors can turn the lights on the second someone walks through the doorway, creating a safe and well-lit environment.

Speaking of safe, the pandemic also highlighted some applications for occupancy sensors. Light switches are communal objects, i.e., germ magnets. Like automatic faucets and hand dryers in restrooms, occupancy sensors can be part of a heightened hygiene protocol, which is especially helpful in hospital or care home settings.

Where Are Occupancy Sensors Used

Once customers understand the function and benefits of occupancy sensing, other opportunities for energy saving become apparent, such as:

Practically any space where people come and go can use occupancy sensor technology to reduce energy expenses.

The only spot where occupancy sensors are tricky? Places where line of sight might be an issue. Because PIR requires an unobstructed line of sight, it’s not an ideal choice for places like multi-stall washrooms, where the person using the room is behind something such as a stall door (nobody wants the room to suddenly go dark while they’re…ahem…otherwise occupied.)

The impact of occupancy sensing technology on energy use isn’t lost on the utilities that offer energy rebates. Some offer additional or larger rebates for the use of fixtures with these controls over standard fixtures.

For example, Electrical Contractor has recently revealed that for 2021, three of the five top lighting control rebates are for occupancy sensors. 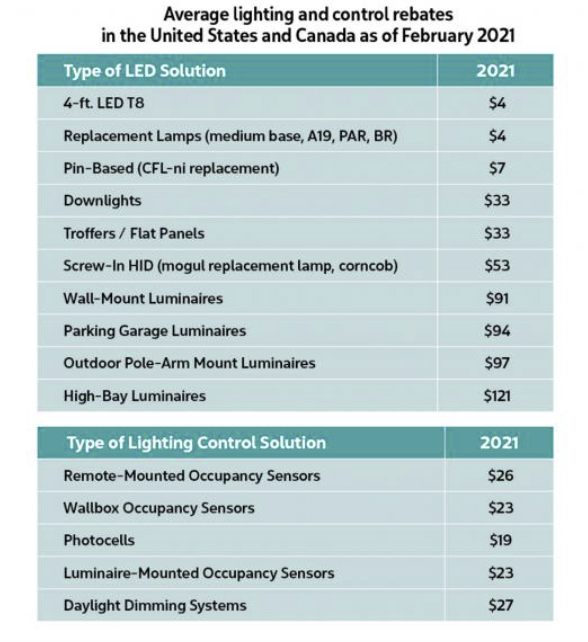 Beyond rebate opportunities, for some spaces occupancy sensing may be needed to comply with code. For example, state energy codes in the United States require automatic shut-off of lighting in commercial buildings greater than 5,000 square feet in size, with few exceptions.

Sensors are a smart option to add to a pitch if rebates will be the make or break factor. Offering customers money right out of the gate for the choice of fixture can be a very attractive proposition.

Occupancy sensors, along with daylight sensors and fixtures with adjustable output and color temperature, give customers the flexibility to adapt their environments to changing needs.

As the lighting expert, it’s your job to help them appreciate the value of occupancy sensing, opening their eyes to application and benefits they may have never otherwise considered.

Helping your clients save money, keep people safe and healthy, and improve efficiency? Mom and Dad would be proud.